We would like to offer our sincere support to anyone coping with grief. Enter your email below for our complimentary daily grief messages. Messages run for up to one year and you can stop at any time. Your email will not be used for any other purpose.

Share a memory
Obituary & Services
Tribute Wall
Read more about the life story of Kenneth and share your memory.

Kenneth J. Graham, 86, of Fort Mill, SC, passed away December 1, 2022, with his family by his side after a courageous battle with Alzheimer’s.

Born November 13, 1936, in New York City, Ken was the oldest of four children.  Ken was admired for his strong work ethic and dedication to everything he did.  From parking cars at Yankee Stadium to helping his mother raise his younger siblings, he could always be counted on.  Ken attended high school at St. Simon Stock in the Bronx and graduated in 1958 from St. John’s University in Collegeville, MN with a Finance and Accounting degree. While in college, he fell in love with Irene Schwegman at a party in St Cloud, MN. Unfortunately, Irene had other plans and she and two fellow nurses left in her Hudson Hornet to work in Denver, Colorado.  Ken went back to the Bronx after graduation to start his first job with General Motors in Tarrytown, NY.  Irene and Ken stayed in touch and then one night Ken heard from a friend that he could catch a ride to Denver.  After a few weeks stay, Ken asked Irene to move to NYC and start married life.  They would go on to have 3 beautiful children (Jackie, Dan, and Mike) and celebrate 58 years of marriage until Irene lost her battle with Alzheimer’s in 2018.

Ken enjoyed a 37-year career with GM in New York and Michigan.  He progressed through the ranks in numerous finance roles and ended up as the Comptroller of the Lake Orion, Michigan plant.  The plant at one time was the largest building under roof and was dedicated by then President Ronald Regan.

He was an avid golfer and a long-time member at Indianwood CC in Lake Orion, MI.  Ken and Irene bought one of the first lots on the New Course at Indianwood and lived adjacent to the 15th hole for 12 years.  They loved to entertain and fill their house with people, including the infamous one club tournaments with their three children. They would later retire to Amelia Island Florida and continue the one club tradition with family and friends.   Ken fulfilled his dream of living on a beautiful ocean and near a golf course when they settled in Amelia. Ken and Irene joined Long Point country club and were a force to be reckoned with in the annual couples’ championship.  Ken was very proud of the fundraising work he did for the annual Navy Seals golf tournament.

The family asks that anyone wishing to honor Ken’s memory can make contributions to their local Alzheimer’s Association.

To send flowers to the family or plant a tree in memory of Kenneth J. Graham, please visit our floral store. 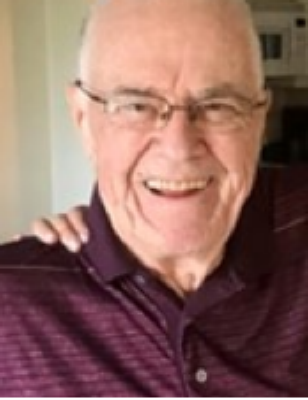 Look inside to read what others
have shared
Family and friends are coming together online to create a special keepsake. Every memory left on the online obituary will be automatically included in the book.

Look inside to read what others have shared

Family and friends are coming together online to create a special keepsake. Every memory left on the online obituary will be automatically included in the book.

You can still show your support by sending flowers directly to the family, or by planting a memorial tree in the memory of Kenneth J. Graham
SHARE OBITUARY
© 2023 The Palmetto Funeral Group. All Rights Reserved. Funeral Home website by CFS & TA | Terms of Use | Privacy Policy | Accessibility